Prosecco DOC at Origin for the protection of geographical identity: first in line to protect the environment and landscape of its production area. An agreement was signed on the same occasion with the Tequila Consortium for international protection.

Treviso, 19 October 2017 - The international meeting regarding Geographical Indications (the definition used outside the EU for DOP and IGP protection systems) organised by Origin and Consorzio Prosecco DOC, concludes today with a visit to the Prosecco production area. The event has attracted experts from all over the world, from Cambodia to Mongolia, Mexico to the USA, South America to Africa and from all over Europe to examine crucial issues affecting the Denominations, and in particular the battle against counterfeiting, protection on the internet and the environmental, social and economic sustainability of production. On the table: IGs such as Prosecco DOC, Bavarian Beer, Tequila, Pisco,  Comté Cheeses, Whisky, Columbian coffee, but also other food-related IG  products such as Argan Oil used for cosmetics or leather-making.

"We are extremely proud to host this international event on its first visit to Italy," declares the President of the Prosecco DOC Consortium, Stefano Zanette. "Geographical indications are an exceptional tool for adding value to areas of production. We also appreciate the fact that Origin is concentrating its efforts not only on international protection, but also on sustainability in its broadest form."

Origin is an organisation based in Switzerland with five hundred members including consortia, groups of producers and institutions from the world of DOP, which recently held its biennial meeting in Treviso where it elected its new president, Claude Desroches of France (President of Fromage Comté). An event with incredibly rich and diverse input from participants in terms of both geographical provenance and role.

In addition to representatives from consortia protecting designated production areas around the world, the meeting was also attended by delegates from the European Union, the Ministry of Agriculture, the European Office for Intellectual Property, the FAO and the Istituto Poligrafico e Zecca dello Stato. Local authorities, such as the commissioner for agriculture of the Friuli Venezia Giulia Region, Cristian Shaurli, were also attending the event. The President of the Veneto region, Luca Zaia, sent a letter of best wishes and welcome which was read out to the delegates.

"Besides being an honour, this is a great opportunity to show off our denomination at an international level,"  explains Luca GIAVI - Director of the Consorzio Prosecco DOC. "160 delegates from 50 different countries have come to Treviso over the last few days, representing some of the most prestigious Denominations in the world, and the fact that we have been able to welcome them here demonstrates Prosecco DOC's significance worldwide.

The event was also an opportunity for networking and launching new collaboration. The Tequila Consortium signed an agreement with the Consorzio Prosecco DOC for international protection. "We know how important the Prosecco market is in Mexico and in the world" declared Miguel Angel Domininques, President of the Consortium for international protection of Tequila, after signing the agreement. "This agreement seals a crucial alliance that will encourage the sharing of experiences and the development of new market studies and analysis of consumer needs." For the consortia, the consumer always comes first. If we can satisfy customers by giving them the product that they expect while also working on innovation, this collaboration between Prosecco and Tequila will certainly have a great and extremely productive future."

"The term Prosecco," concludes Stefano Zanette, "does not identify just a sparkling wine, but refers to a highly specific area of origin. I hope that these three international days have been helpful in clarifying this concept. Origin handles protection of the Denominations primarily in the battle against counterfeiting, but here we have also worked very hard to protect the land by ensuring sustainability of the environment and the  landscape. These are things which we hold dear to our hearts and in which we have led the way: we were the first to introduce precise measures regarding pesticides and glyphosates in the product specification and we have also introduced hedges in the vineyards in order to create a more attractive landscape for future generations."
The international meeting of world Geographical Indications ends today with a guided tour of the production areas of the most popular sparkling wines. A valuable opportunity to also promote the Denomination in terms of tourism: 160 potential new ambassadors for our wines will leave understanding that Prosecco is not just a product, but also a territory. 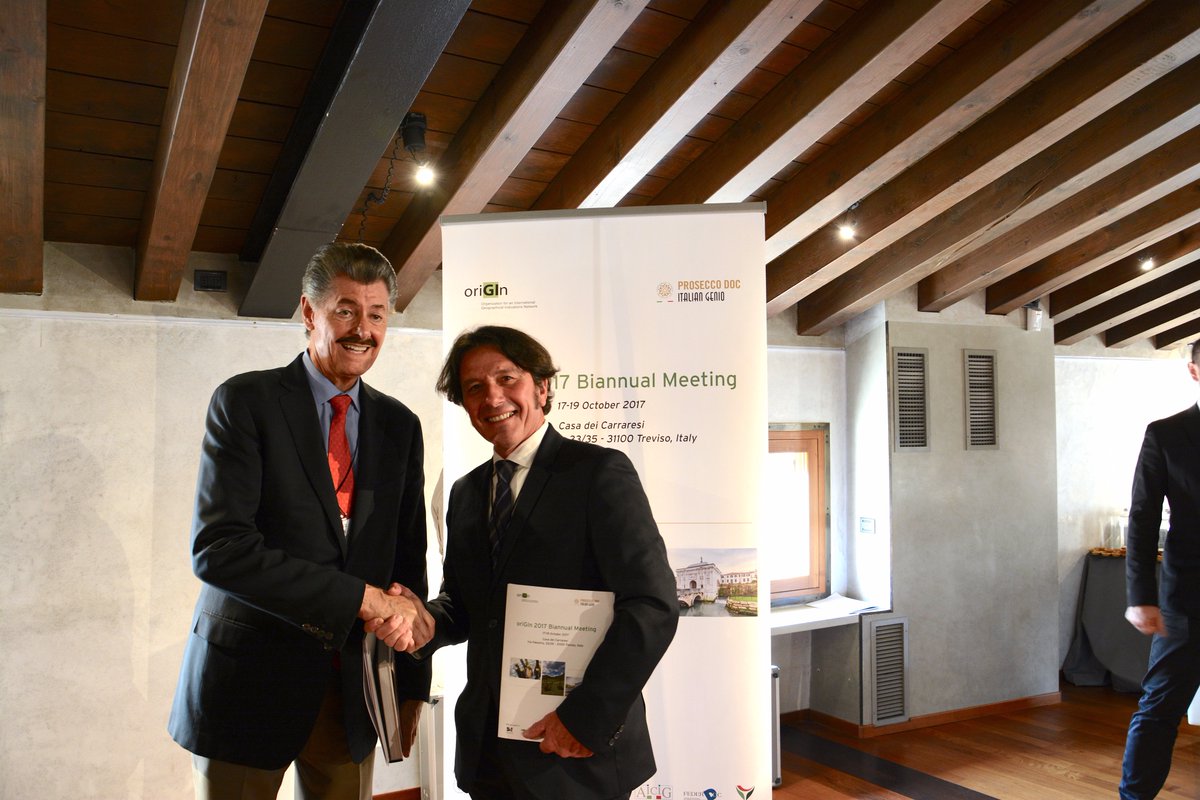 Gorizia and its medieval castle